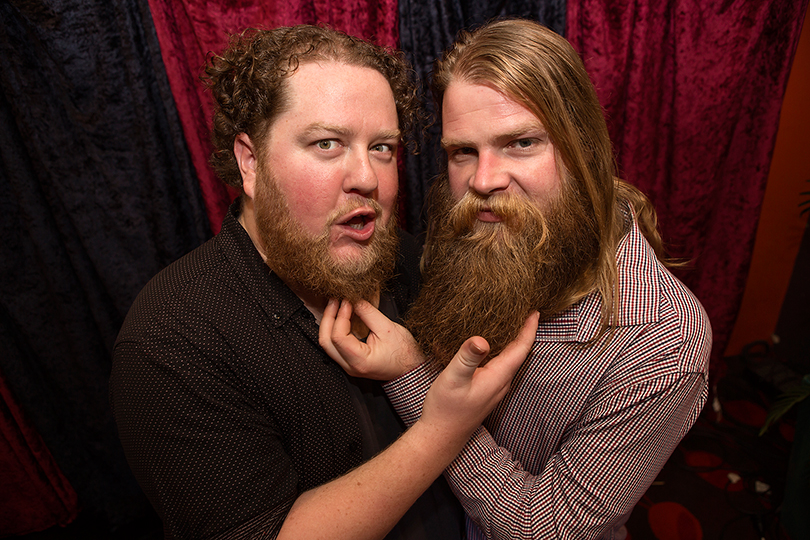 You all know our venue hosts amazing, live music every week but did you know our Front Bar is home to a slew of local, talented musos from Tuesday – Saturday?

Well, now is the time to get acquainted.

Over the next few weeks, we’ll be introducing you to the faces behind the Front Bar magic, so you can see what makes them tick, and why they think you’re missing out on a heck-of-a-lot of action if you’re not coming down on the reg!

Last week, we spoke to Tom Bettany, one quarter of a hairy quartet who hosts our Friday Free For All Open Mic Night.

Hey, Tom, thanks for sitting down for a chat. So tell me, this music thing, how did it all start for you?

The four of us have been in bands together since well before The Beards - we formed our first band straight out of high school; the obligatory bad band… as those first ones usually are.

After cutting our teeth on the local scene following high school and during uni we formed a band called The Dairy Brothers which actually landed us a Front Bar residency at The Gov. At the time were so stoked to be actually playing at The Gov; was a bit of a dream to be playing there.

The Dairy Brothers slowly morphed into The Beards and that became our life for over a decade; something we never could have predicted happening!

Now, as The Beards closed our final chapter last year, we’re all back at The Gov hosting their weekly open mic night – the Friday Free for All. Any given Friday, there are two of us around in the Front Bar, which is always a lot of fun.

Our aim is to make it the most welcoming open mic night in town, welcoming all types of music and musos. From those fresh out of playing in their bedrooms, to the one’s who have never been on stage before, right up to mainstays of the SA music scene.

We too also enjoy busting out a few tunes each week, often playing hastily slapped together numbers, which is not something we’ve done in a long time!

The bar must have changed a lot since then?

Yes – this is literally the same room we originally played; it is surreal to be back. No more smoking inside but in winter there’s a roaring fireplace – so it’s smoky all the time!

The stage used to be right next to fireplace, no raised area, just playing down on the floor. Now it’s all moved around and there’s actually a stage; everything’s a lot nicer.

You’ll have to bring photos down some time!

You’ve all obviously done the hard yards to make this ‘music as a career path’ thing work. What advice would you give to those starting out?

Give it a bash! You’ve gotta get up there and hone your craft and open mic nights are the perfect environment to do it. Build towards getting to a point where you can put on your own shows, support other musos how you can; just be active, getting out and doing it!

You have to get to a level where you’re confident performing and find own voice on stage, etc.

What are some of the cool things you see down here each week?

One time this family brought their dad down for his 40th birthday – they roped him up on stage. He had quite a voice, but had never actually got up on stage before. Next minute he took on a Sinatra backing track and absolutely nailed it; totally blew the audience away! It was awesome. He owned it and had fun time doing it.

Then there was Jimmy one leg – the one-legged banjo player - who absolutely nailed the six-string banjo.

But it’s also the great regulars coming through each week who improve each time they play. It’s awesome to see an artist thrive in front of an audience willing to give them ago.

What about the kids? Can they come down and perform too? Is the night limited to a specific style or genre?

Yes, kids are most definitely welcome. It’s such an eclectic night; we’ve had high school kids coming through (with their parents in toe) playing for the first time. And some are phenomenal!

In terms of genre, we’re not limited, we’ve had bluegrass bands / country bands, all sorts of different acts.

Do you follow the same format each week? How do you keep it interesting?

A few months back we ran the Heaps Crowded House Night. The aim? To pull off the largest Crowded House cover band – anyone could join – and we ended up with 24 members on stage who had never played together!

Sounds like a place you’d want to be on a Friday night!

Yeah, a lot of people are coming along for meals, music and drinks to make a night out of it.

You don’t actually have to play to enjoy a fun night of free entertainment – every act perform about 3 songs and there’s always a real mixed bag of acts doing their three best / newest / worst songs.

Come and suss it out sometime!