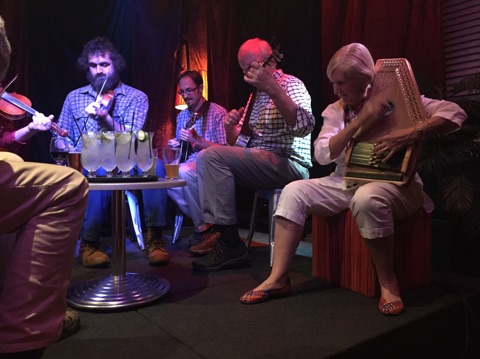 The music of the Appalachian mountains of America has captivated some of the music-lovers at The Gov. The Appalachian Fiddlers group calls themselves ‘Dogpatch’ and they meet in The Gov’s Front Bar each Tuesday night for a rollicking good time.

We caught up with Dogpatch member, Ashley Turner.


I’m a classically trained fiddle player and am very attracted to certain types of fiddle playing that emphasis the raw rhythmic drive.

I have the same feeling for a lot of classical music and old time fiddling, Irish, Scottish and Cajun music are all wonderful examples of the sort of rhythmic drive that fiddle produces.

Is that what got you into the fiddle in particular?

I think so, I also remember when travelling in the US with an orchestra and was invited to join in an amateur fiddle session by the people I was being billeted with and they played Appalachian music as natives to the region (Georgia).

I found I couldn’t participate because my classical training had led me to be reliant on other cues and realized that training wouldn’t allow me to access this wonderful, joyful music that I wanted to take part in.

That set me on a path to developing my technique, loosening up so I could play it.

What do you love most about the music?

Each tune has got a little treasure inside it. And, from a musician’s point of view, the joy is to discover that. It may be a little rhythmic twist, or melodic twist – and there’s one in every one of these tunes. And that explains what has let them survive so long. That’s what musicians do – collect that treasure.

You can’t play this music without immersion. You can’t just read the dots. That doesn’t produce the wonderful, joy and drive.

I don’t believe that it can be performed just from notation. It has to be felt and it has to have been absorbed.

It was watching people dance to this music, watching wonderful audience response when it’s heard that made me fall for it. It’s infectious and makes you want to move and tap your feet. It makes me want to dance whilst I am fiddling.

It’s sometimes called old timey, but still relevant to young people in the US – is that correct?

Yes, and it’s getting some traction as a marker of regional identity. A proportion of the people there are becoming very proud of this local and distinctive musical identity.

Is this the standards of that region.

Yes and these are being carried, like the Irish and Scottish traditions, by individuals. These people are honored as the carriers or rare and precious traditions.

How long have you played with Dogpatch?

A year and a half.

How did it come to be that you joined the group?

I’d been working at the music of Adelaide as an ethnomusicologist and at the end of 2015 my job was closed. I found myself having to make a choice – either becoming down in the dumps or seizing the opportunity to do something I’d been meaning to do all of my musical life, which is deepening my experience of fiddle music.

What appealed to you about joining the group?

I’m attracted to how very community oriented the music is. It’s a rich form of social engagement and it creates social spaces, which I just love.

Those social spaces are very egalitarian social spaces. Musicians come in and join and no matter their technical capacity they are made welcome.

Dogpatch is inclusive, embracing, and community based. I am very attracted to all of those qualities not just from a musical point of view, but also from a political and social point of view.

We play together every Tuesday night and I reckon it’s a good group. When it’s really working well it’s wonderful. It has the potential to really grow into a fine musical ensemble.

What’s the process like of putting together song lists?

Because I’m reasonably new to the group, rather than imposing my stylistic choices I feel it’s an opportunity to get across the repertoire that the rest of the group already has.

I enjoy adding in an occasional new piece and am eager to hear comments from the rest of the group to what they would like to be playing. It’s quite democratic.

I’ve fallen in love with some of the tunes that I’ve been introduced to.

In terms of new participants – how do people get involved?

Everybody is welcome. That’s the first thing. It would be great to see some renewed energy and membership.

Anyone who has a love and interest in this music is more than welcome. It’s the kind of music that you don’t have to have a great familiarity with the exact tunes in order to participate. Because the music is essentially harmonically simple and because the rhythms are easily described it makes sense. The shuffles and patterns are a fantastic opportunity to learn to play the fiddle and get very rapid musical satisfaction.

How about people who want to come along and listen?

We welcome an audience. If this is the kind of community and music that interests you it will set things alight for you. It’s uplifting and has its own exciting logic and I’d hope to see people dancing. When people dance whilst I’m making music, it’s almost transcendent.