triple j, I OH YOU, Converge Mgmt and The Hopeless Utopian

Off the back of an enormous year for the young artist including the release of her debut album Sugar Mountain to widespread critical acclaim, countless sold out shows and three ARIA nominations to name but a few milestones, I OH YOU are today pleased to present Jack River’s Sugar Mountain Ball, touring Australian theatres this May and June in the biggest rooms Jack River has headlined.

Jack River explains, “To complete the Sugar Mountain dream I am coming out to theatres to have the prom night we all never had. I made this album to be a grand and brilliant sparkly ballroom where you pour your whole heart out on the dancefloor to heal and cry and become strong. This tour will be the realisation of that ballroom where everything will shine and melt and taste like sugar.”

Presented by and announced via triple j, the Sugar Mountain Ball will transform venues across the country into real life ballrooms reminiscent of 90’s proms past. The tour will begin at Brisbane’s Tivoli on Friday 31 May taking in Melbourne’s Forum Theatre, Sydney’s Enmore Theatre, Fremantle’s Metropolis and finish up at Adelaide’s The Governor Hindmarsh on Friday 14 June.

“Eves Karydas, San Mei & Arno Faraji are three of the most incredible artists in Australia right now,” explains Jack River, “I have on repeat everyday. These artists are bold and individual in their feats to create their own brand of alt pop music - it’s going to be an honour to share the stage with them.”

Jack River first gifted us her debut EP Highway Songs No. 2 in 2016 featuring the stunning singles ‘Palo Alto’ and ‘Talk Like That’. ‘Fool’s Gold’, the first single from her debut album Sugar Mountain dropped in late 2017 and marked the start of what can only be described as a whirlwind campaign for Sugar Mountain. Singles such as ‘Fault Line’, ‘Limo Song’, ‘Ballroom’ and ‘Confess’ make up an incredible album that depicts a hazy adolescent grief and loss of innocence that followed a life changing family tragedy.

Sugar Mountain picked up overwhelming support and widespread critical acclaim, debuting at #11 on the ARIA Album Chart. Jack River has toured the country a number of times playing countless headline shows as well as Australia’s biggest festivals including Splendour in the Grass, Falls Festival and was recently announced on the Groovin The Moo lineup. Jack River teamed up with Peking Duk in January for the incredibly sweet ‘Sugar’, the video for which just dropped last week. Among all of this, Holly Rankin (the woman behind Jack River) curates and directs Grow Your Own, a festival in her hometown of Forster, and is working on the next instalment of Electric Lady.

But touring is where Jack River feels most alive! “Meeting fans all around Australia over the past year has been unlike anything I ever imagined,” she explains. “The experience of sharing my songs has given me magic fuel to dream bigger and brighter - this tour will be a celebration of that. I also encourage you ALL to dress like you’re coming to the prom of your dreams.”

Join Jack River with Eves Karydas, San Mei and guaranteed glitter in your hair for weeks to follow, at the Sugar Mountain Ball in your city.

Telstra Thanks® pre-sale starts 9am on Wednesday March 6 and runs until 9am Thurs March 7 via Telstra.com/music 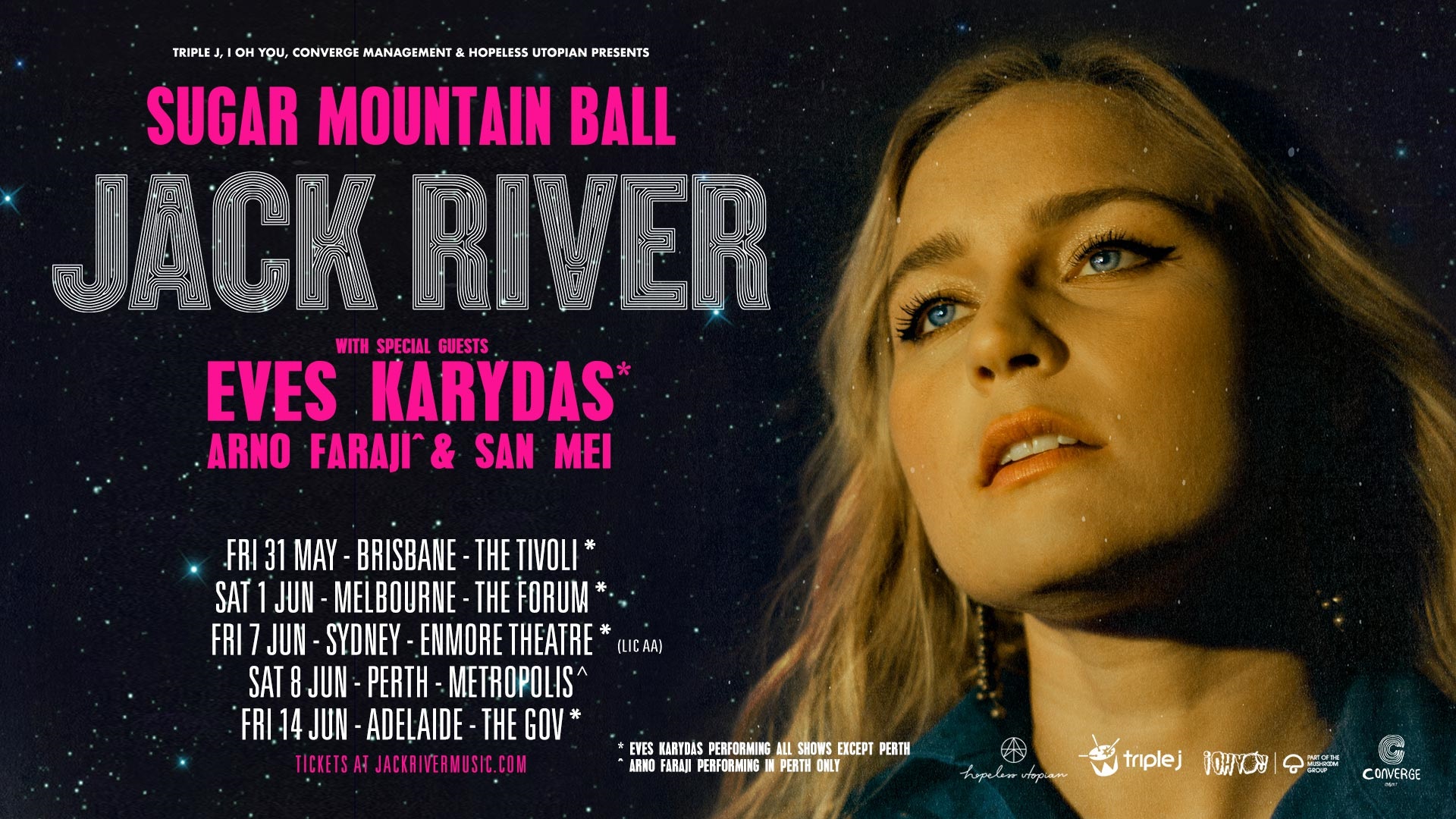