One of the most indelible, progressive and passionately admired rock bands of our time, The Church returns to Australian stages in Nov/Dec 2017 to unveil another masterpiece of sonic exploration, Man Woman Life Death Infinity. The ARIA Hall of Fame band’s 26th album is their second with the rejuvenated line-up - Steve Kilbey, Peter Koppes, Tim Powles and Ian Haug - and is released this Friday worldwide.
The past several years have been wildly successful for the church, pulling a 20,000 strong crowd at at Primavera Sound, a performance at SXSW, four North American tours and their first European tour in almost a decade. Following sold out Australian shows in 2015, the band return straight from a USA jaunt to embark on an eight date National tour this November. Woven with classics spanning almost 50 years of underground glory, the set will feature the Australian debut of selections from Man Woman Life Death Infinity, including the shape-shifting dreamscape of the first, exhilarating cut, ‘Another Century’, and its imminent follow-up, new single ‘Undersea’: yet another new dimension of chiming strings and kaleidoscopic images.
Man Woman Life Death Infinity is where the revitalized quartet’s freshly tuned chemistry reaches a new potency and precision: ten songs, 45 minutes, and a quantum leap into unexplored territory as strange as it is irresistible. Written in two separate sessions in March across Ian Haug’s Airlock Studios in Brisbane and Tim Powles’ Space Junk Studios in Sydney Man Woman Life Death Infinity is the first full length since the early 90s where the band have collected their song ideas before hitting the record light and just ‘going with the flow’. Co-produced alongside long-term audio accomplice Ted Howard at Rancom Street Studios, Man Woman Life Death Infinity delivers a more succinct release than 2014’s Further/Deeper.Singer, lyricist and bassist Steve Kilbey explains this 26th full length offering is The Church’s ‘water record’.
“I guess water is my element. I’ve always marveled at the sea and rivers and rain. It wasn’t conscious at all but on reflection, it definitely is a preoccupation on this record. What that means, I don’t know,” he says. “This is an album we’re really looking forward to exploring live,” he says. “The way I write lyrics is very stream-of-consciousness. I never question them until we perform live, so I discover them in time as much as the audience.”
The Church will be joined onstage by special guest, former Remy Zero (UK) guitarist Jeffrey Cain on keys, additional guitars and vocals. Part of the early Radiohead scene, Remy Zero first supported the band on The Bends album tour, Jeffrey brings years of live experience and musical influence to complete a consummate lineup for this very special run of shows.
Man Woman Life Death Infinity vinyl is available for pre-order here. 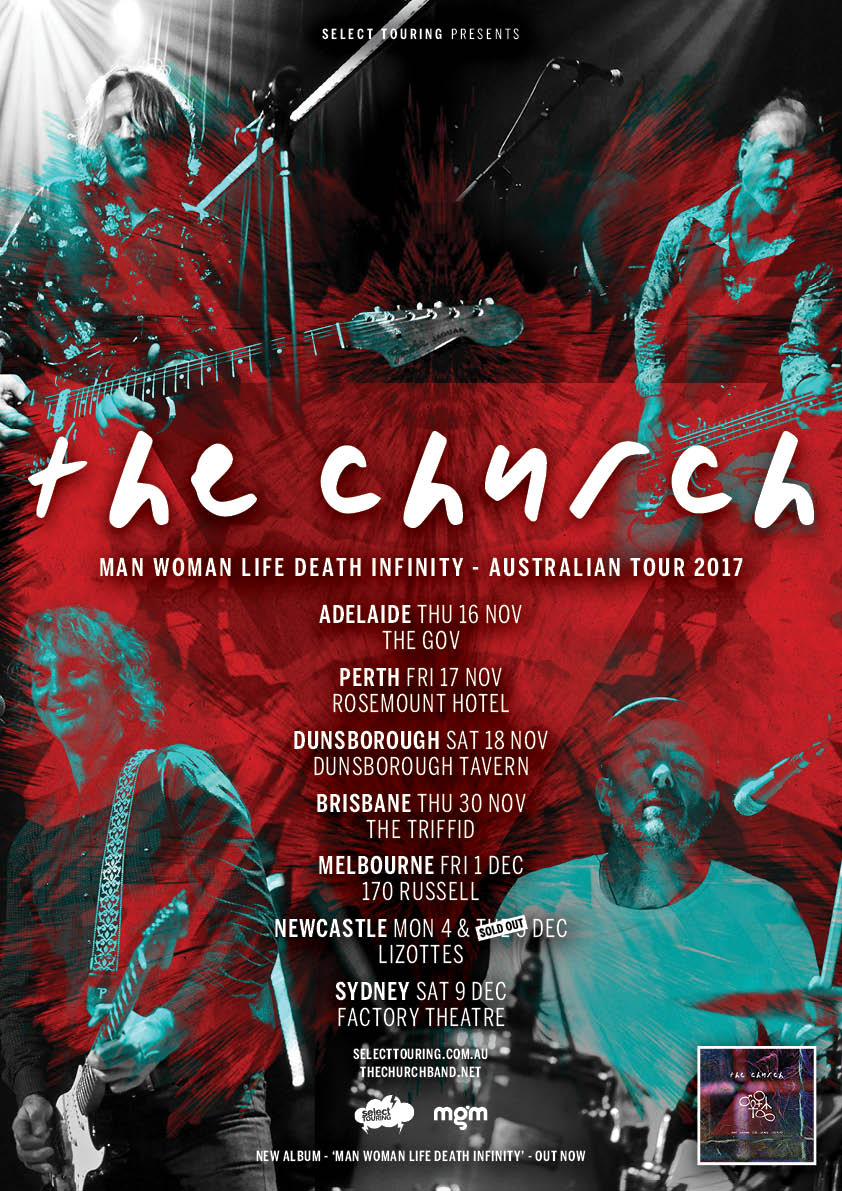