Hey good news everyone: Frenzal Rhomb have made a new album, and booked a tour to go with it!

Yep, Frenzal Rhomb, the most hospitalised band in the world (Seriously, everything from broken drumming arms and detached guitar-playing retinas to an actual pig-borne tapeworm in the lead singer’s brain), are releasing their ninth full-length punk rock record. And just like a ninth child to a religious family, they’re really getting good at it. Recorded once again by Bill Stevenson (Descendents, Black Flag) and Jason Livermore at The Blasting Room in Fort Collins, Colorado, Hi-Vis High Tea is a concept album about a whole bunch of different concepts. 20 songs clocking in at just over 30 minutes, but what they lack in length they make up for in brevity.

And it sounds fucken rad. But don’t take my word for it, I’m just a computer-generated bio-writing algorithm Frenzal Rhomb downloaded from the darknet; you should just listen to the album. “Oh but it’s not out until 26th May” I hear you say. Can’t your l33t haxxor mates wikileak it from Assange’s Trumpified arsehole? If not then here, as a gesture of goodwill, is a gift; a song in fact. A shiny, pop, ready-for-radio single. Perfect for you end-of-year summer hit compilations. Oh yeah, and it’s called “Cunt Act”. Learn it, coz your kids are gonna get it tattooed on their faces. And enjoy the video, as crafted by Frenzal Rhomb collaborator and enabler Mr Fox Trotsky. Please clap.
Check out the new 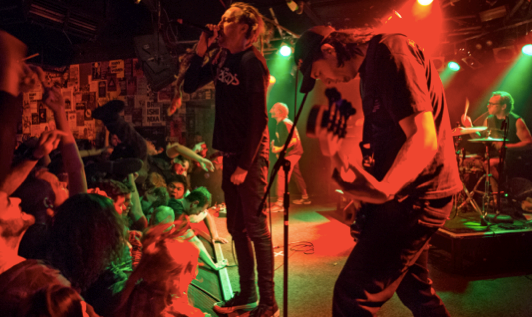