WALK THE MOON (US)

WITH SPECIAL GUESTS THE GRISWOLDS

Off the back of sold-out performances in Melbourne and Sydney earlier this month, Ohio natives Walk The Moon confirm their return to Australia in January 2016. The four-piece will take their incredible live show across the country on their third visit to Australia, coming through The Gov in Adelaide on Saturday 23rd January.

Walk The Moon are in the country this month for a string of special performances, including sold-out shows at Oxford Art Factory in Sydney and H-W-L-R in Melbourne, and they will be playing a rendition of their global smash hit Shut Up & Dance at YouTube FanFest tomorrow. With the recent release of their bold new album ‘Talking Is Hard ‘and infectious second single Different Colours, the band is fast on-track to becoming the next global pop-rock sensation.

Joining Walk The Moon on the road in 2016 are Sydney party-starters The Griswolds. The band’s debut album ‘Be Impressive’ was released earlier this year to critical acclaim; best described as a indie-rock record that will break and mend your heart, and leave you dancing with joy. The Griswolds take off to North America for an extensive run of dates this October and November, returning to Australian shores in time to play five epic dates with Walk The Moon next January and continue both band’s solid touring connection; The local indie four-piece hit the road with Walk The Moon across a 45+ date North American tour in March this year, regularly jumping on-stage during each other’s sets and covering each other’s songs at some of the nation’s premiere venues including Terminal 5 in New York City. Their upcoming Australian tour promises to deliver an experience that is nothing short of sensational, and will leave audiences screaming for more. Check out this recent cover of The Griswold’s ‘If You Wanna Stay’ from Walk The Moon, to get a taste of what’s to come when these killer live acts take the stage in January 2016.

Walk The Moon have recently sold-out dates across the United States, and performed to over 40,000 fans at this year’s Lollapalooza Festival. Their upbeat anthem Shut Up & Dance has been one of the biggest hits of the northern hemisphere summer, surging to the top of the Billboard chart and hitting triple platinum in the U.S. The track cracked the ARIA Singles Chart Top 3, and is currently triple platinum in Australia. The band wowed audiences with a high-energy performance of Shut Up & Dance at last week’s MTV VMA’s Pre-Show in Los Angeles, setting the tone for the night’s proceedings. Exuding charisma and bravado, the band’s front-man Nicholas Petricca led the audience in a dynamic rendition of the smash hit. Walk The Moon scored their first ever VMA nomination this year, in the category of Best Rock Video.

Hailing from Cincinnati and formed by singer/keyboardist Petricca, Walk The Moon have hit their stride since the release of Talking Is Hard. They’ve played for massive crowds at Bonnaroo and Lollapalooza, taken the stage with the likes of Pink, Panic! At The Disco and Fun across the US, UK and Europe, and have appeared on late- night TV staples Letterman, Fallon, Conan and Carson. Walk The Moon are one of the most exciting acts on the global music scene, and will be creating the next chapter of international success when they visit Australia in January 2016! 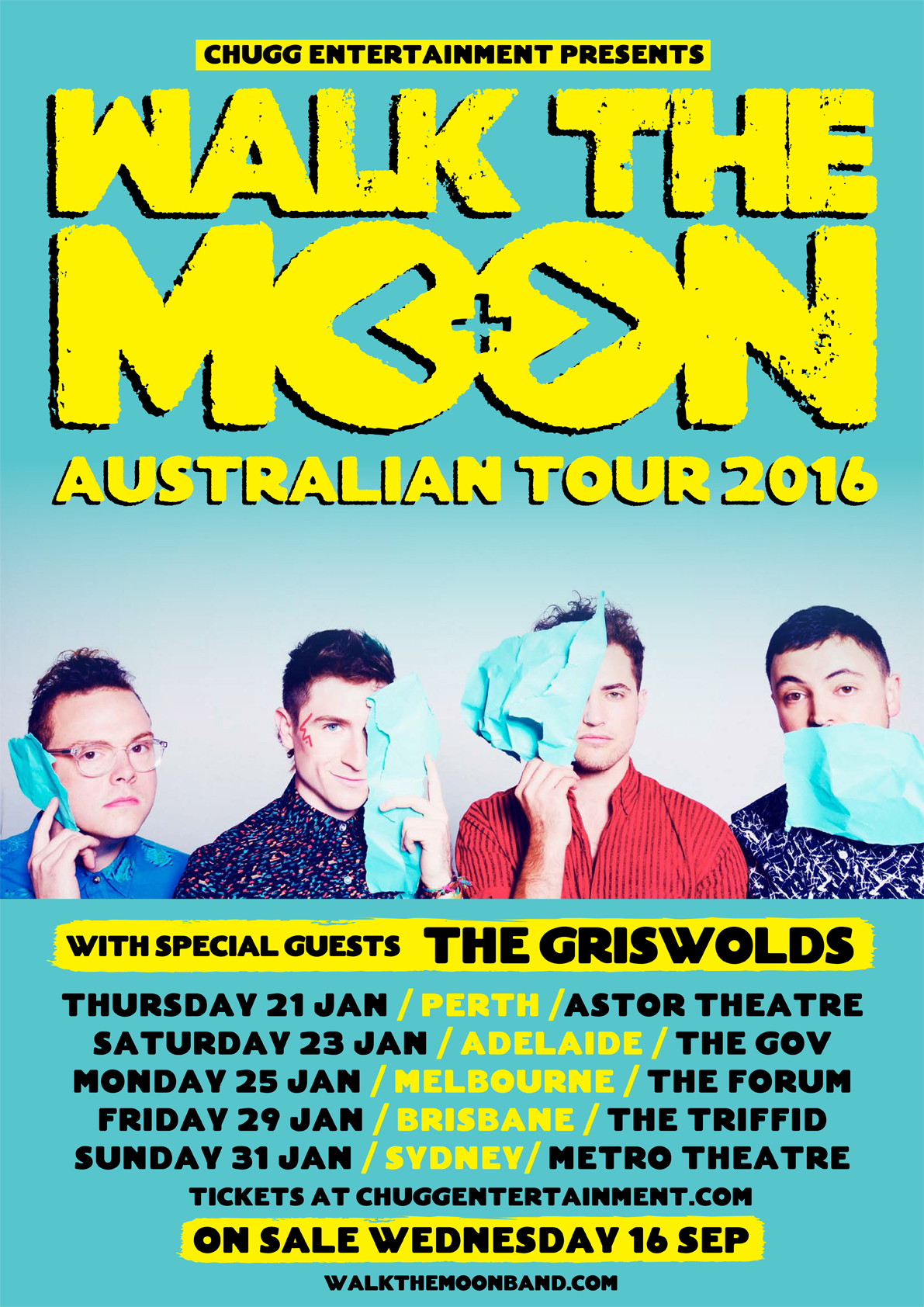