In what may be the most lethal double-header tour Australia has seen in decades, the COSMIC PSYCHOS and DUNE RATS are combining forces and heading out to The Gov together on Thursday, 25 June. Two rowdy bands notorious for their shitfaced shenanigans. What could go wrong?

“The Cosmic Psychos are always drunk” - Buzz from The Melvins

It’s been nearly two years already since the acclaimed Cosmic Psychos documentary ‘Blokes You Can Trust’ was released. The film’s warm response quickly drew the band to Europe and America, reuniting them with old mates L7 in Los Angeles (their show at the Echo was the first time that three of the L7 band members had set foot in the same room since they split up). The Psychos also toured with long time friends Pearl Jam on the 2014 Big Day Out circuit. And yes, the rumours are true; Eddie Vedder brought his infamous 50 cent piece on tour with him, and put it to use on more than one occasion.

The first song lifted from the album is ‘Better, Not Bitter’. It’s classic Psychos and boasts one of the most infuriatingly catchy choruses this side of Thunderstruck. There aren’t many scenarios in which it’s appropriate to scream “IT’S FUCKIN’ BULLSHIT MAAAATE” at the top of your lungs, but if anyone’s capable of bringing out the larrakin in their listener, it’s gotta be The Psychos.

Dune Rats have not stopped moving for a long time and they ain’t complaining! They are busy packing twenty lives into one and follow one solid mantra: no kooks, no gutties. After a huge debut album release in Australia, the fellas have toured relentlessly USA, ASIA, South Africa, a huge UK/European tour supporting British rockers The Subways and their own European headlining run around the release of their self-titled debut LP. Straight off the jet from Ol’ Blighty, there’ll be no time for sleep as the fellas embark on a tour with one of their all time favourite Aussie bands - Cosmic Psychos. 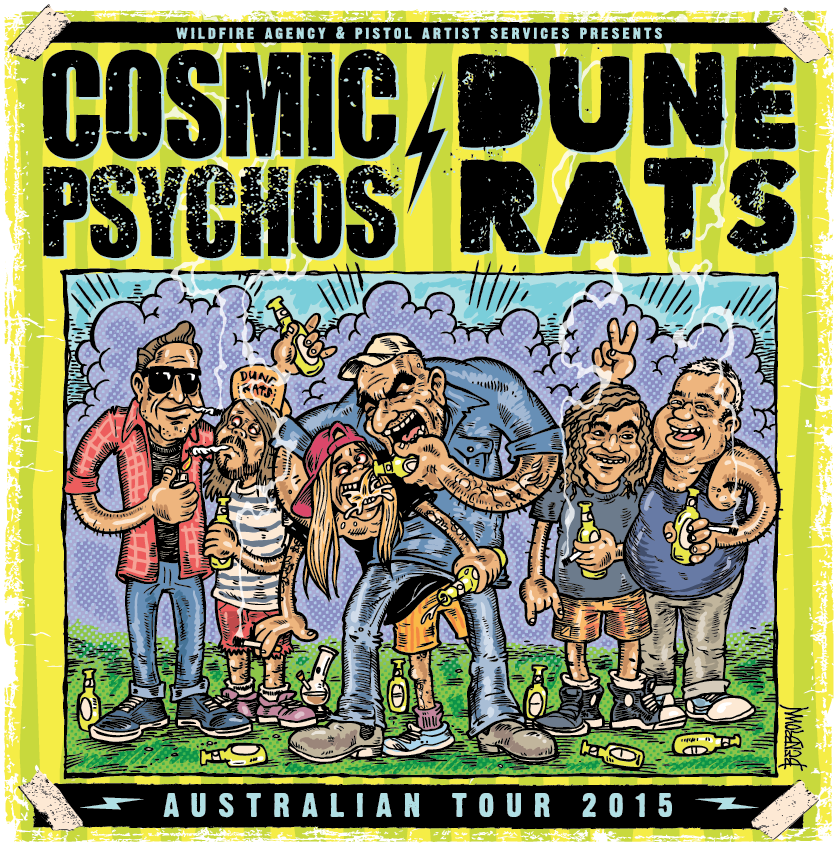