Lock up your daughters AND your Mothers. Check your pets too!

The Australian Alice Cooper Show is back at the gov again this year with another action packed show full of madness and mayhem. See the show many people are calling “the best show to emerge from Radelaide in a long time”.

Watch as they bring to life the power of songs like “The Black Widow”, “Halo of Flies”, “Killer” “Luney Tunes”, “Billion Dollar Babies” and many more including several tracks they haven’t played live yet! Some of them; Alice never even did himself!

This time they’re supported by none other than the very popular Australian Motley Crue Show, recreating the coming together of two of the most infamously decadent bands in Rock history, in a party to end all parties in the main room. There’ll be girls girls girls, and so much leather (or so little leather) you won’t know where to look!

After a sell-out Halloween show at the Bridgeway Hotel last October Dave Hudson as Alice and the rest of the gang are busting to perform again on the Gov main stage. “Last time we played the gov was incredible… the sound guys there really know their stuff and it was pumping really beautifully. I just can’t wait to get on that stage again!”

The Australian Alice Cooper Show are: Chris Anthony and Richard Poray on Guitars, Jason Anderson on Bass, Ashley Miller on Keys and Synths, Steve Smith on Drums while Shelley Hudson and Cindy Brown take care of the backing vocals. Dave Hudson completes the lineup as Alice Cooper, in a role many say he was destined to play.
“What can I say, Sure, I’ve got the nose!” quips Hudson. But that’s not all. He’s also got quite a set of chops on him and delivers that ‘Cooperesque’ growl with eerie pleasure. To look at; well… if you squint just a little, you’d swear it was Cooper himself standing there (or leaping around the stage like a complete madman).


“Authentic and full of energy, this band is amazing, sensational. So tight, together and skillful to play the challenging and difficult Alice Cooper repertoire with such accuracy and power. There is no better band of musicians in Australia than this one!” – Frank Sebastyan FB Reviewer

Known for their iconic live performance this incredible MOTLEY Crüe tribute gives you an and uncannily accurate interpretation of the original MC with the sound and look of the real thing. Formed in 2016 the band has played many shows around Australia.

With classic songs like Dr Feelgood, Girls Girls Girls, Home Sweet Home, Kickstart My Heart and many more great hits. This is another stage show not to be missed. 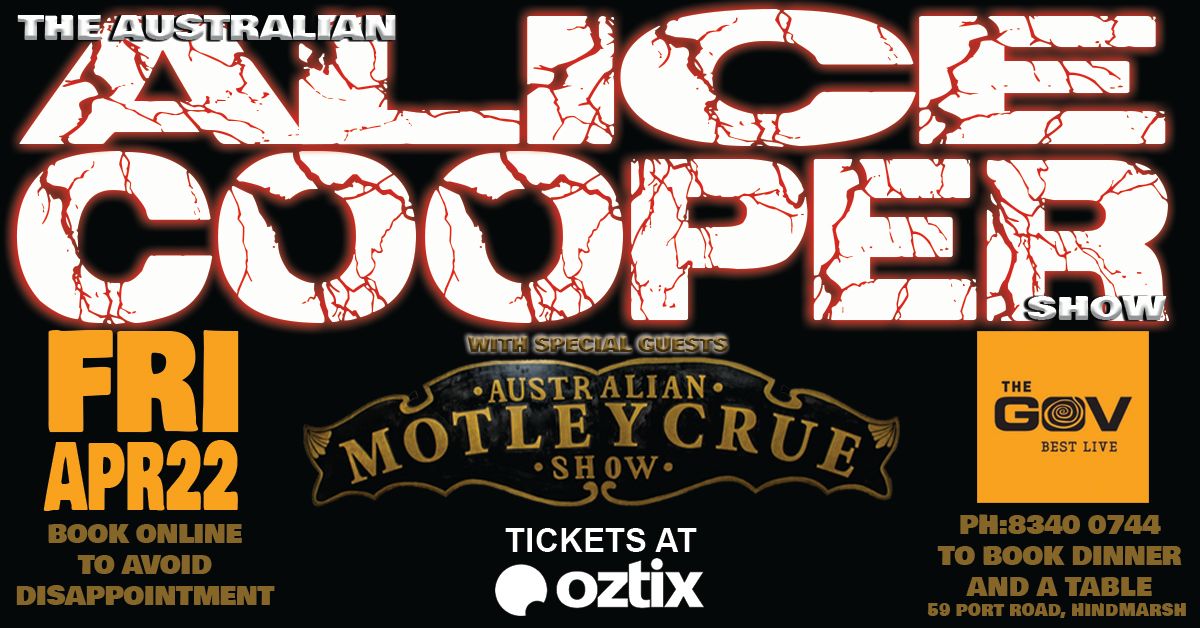