Adelaide’s Hottest Up and Coming Acts – Thursday Nights on the Main Stage at The Gov!

Turnaround Presents are rolling out DAYLIGHT SAVINGS to kick things off in 2021.
Daylight Savings is new series of events taking place on the main stage at The Gov every Thursday night in January. You can expect to see, hear and enjoy some of your favourite local up-and-coming bands in an intimate setting.
To launch the series on January 07, we’ll be treated to a post-punk, experimental rock-show with Placement, Bigtown (Final Show), Coldwave and Purr before we change things up with a dip into the realm of psychedelia, jangle-pop and alt-rock jams of Sons of Zoku, Los Palms and Pelvis on January 14.
Plus more to be announced for January’s 21st and 28th shows!

Placement
Like a shaken can of soda; post-punk / noise-rock from Kaurna Land (Adelaide, Australia).
Through a juxtaposition of experimental feedback, dissonance and rich vocal harmonies, Placement deliver a ferocious and often partially improvised live show influenced by performance art.

Big Town (Final Show)
Big band from a big town with big muscles play their FINAL show.
Big Town are a post-punk band from Adelaide who released their debut ep in 2019, they are due to record their follow up next year for early release before they go their separate ways. Their frenetic energy always energises crowds and the group have been billed with many nationally acclaimed bands including eddy current suppression ring (a show which due to COVID had to be cancelled).

Coldwave
Coldwave are five-piece Adelaide band mixing layered, yearning guitars, echoic drums and uncompromising vocals to assert themselves in Adelaide’s unique burgeoning post-punk scene. Formed through a shared love of post-punk, Coldwave merged from two already well-established bands within the scene.
After their first single release ‘Watch It’ was met with praise from Triple J’s Dave Ruby Howe and Home and Hosed host Declan Byrne, Coldwave have proved their musical experience by pulling packed crowds in some of the city’s more well-known venues, including a sold-out show opening for local influential act Glowing.

Purr:
Purr is a reincarnation of the formerly bedroom-confined song-writing of Katie Schilling now backed and brought to life by Tom Spall on violin and saxophone, Harry Freeman on drums and Jess Johns on bass and vocals. Inspired by grief and gardening, Purr performs songs thick with honesty and gentle melodies.

Sons of Zoku
Sons Of Zöku are an Adelaide-based hybrid tribe of Portuguese-born Ricardo Da Silva and Ica Quintela, and Australian-born Jordan Buck, Oscar Ellery, and Eddie Hannemann.
Their psychedelic sounds echo a combination of influences, and in heartfelt live performance they include sitar, flute, keyboard, percussion, and a yin/yang of unexpected dynamic changes.

Los Palms
Since their inception in Adelaide during the beginning of 2019, Los Palms hit the ground running with their unique Desert Jangle vibes, drawing inspiration from that classic California surf rock and Southern American 60’s sound and played their first ever show supporting California’s Surf/Psych legends The Growlers.
2020 saw them release a number of singles including Gypsy Souls, Six Broke Teens, Lost Phantom and Roll On, a single that has consistently placed in the top 20 on Adelaide’s Three D Radio.

Pelvis
Three-piece Neo-Psychedelic Rock outfit Pelvis have the tunes to make your hips move.
The creative story telling of Vocalist/Guitarist Georgia Nielsen challenges and defies modern rock and punk aesthetics with sweet melodies. The backbone of the band brings Hannah Parks’ inventive lead bass lines and Amy Parham’s loud and unapologetic drumming to create a force to be reckoned with. 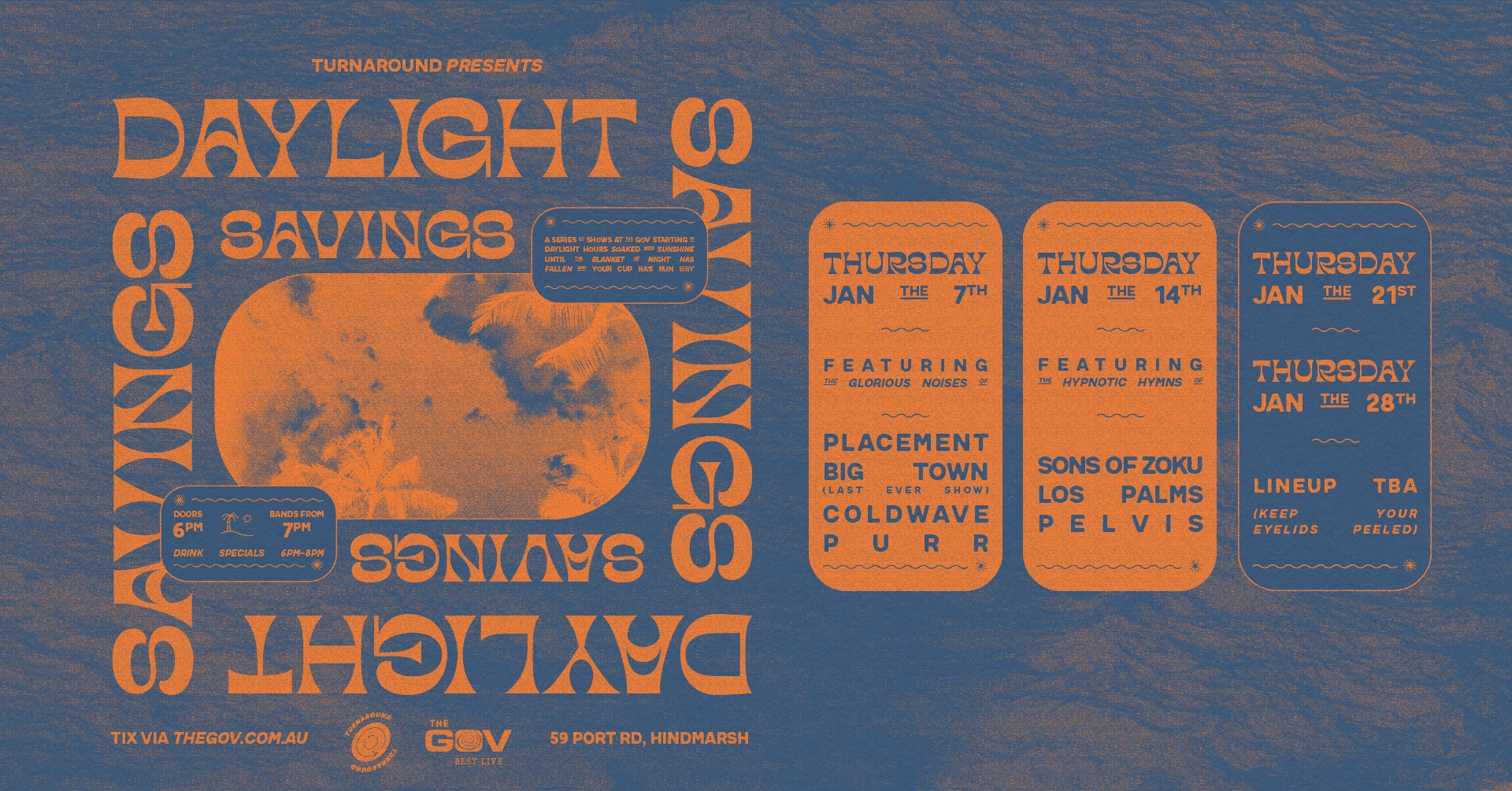